Houston rollover lawyer David P. Willis has handled dozens of rollover accidents. When a vehicle’s roof is not built to stay intact in a rollover accident, the occupants face catastrophic injuries or death from the roof collapsing on them. While every type of vehicle should be made to meet the most strict safety standards available, roof crush rollover incidents in pickup trucks and SUVs are of special concern.

Our roof collapse attorneys have handled many SUV and pickup truck rollover claims in Texas and around the nation. We understand how to correctly establish vehicle defect claims as well as how to collaborate with investigators and cutting-edge technologies to support your case.

If you have involved in a serious Truck or SUV roof collapse accident contact a car accident lawyer. David Willis has experience litigating these cases. He has obtained outstanding results in rollover accident matters.

While many automakers deny that roof crushes are prevalent, we know that this is absolutely not the case in many cases. When a vehicle fault causes an accident that results in severe injuries or the death of a loved one, our lawyers are ready to assist you in seeking justice. 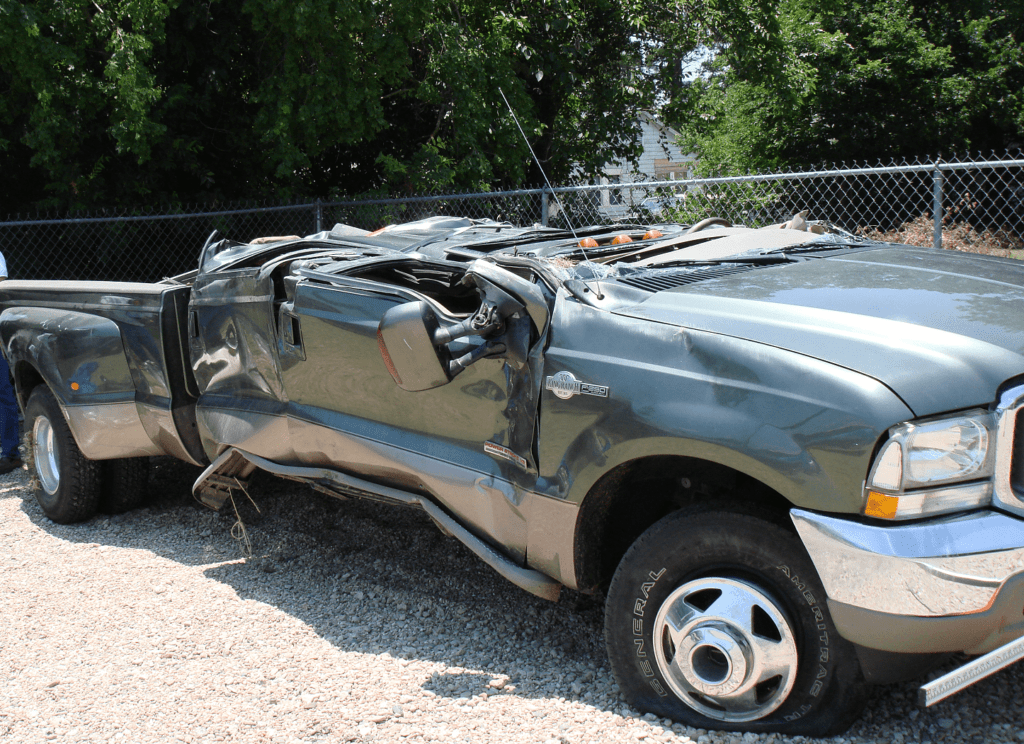 Rollovers are among the worst types of automobile accidents. Many rollovers occur in bigger vehicles, like vans, trucks, or SUVs, which may transport many people at once. Many vans lack accessible seatbelts, leaving many passengers unrestrained and increasing the likelihood of ejection if the vehicle rolls over. Two main types of injuries occur in rollover accidents: ejection injuries and roof crush injuries.

Vehicles aren’t built sustain the weight of the auto when the manufacturer failed to build and design a vehicle that has structurally supported roofs.   Occasionally, the manufacturer may choose to cut costs by not spending enough to provide adequate structural support to the roof. Sometimes substandard materials were used to make door pillars, supports, and other structures that should have reinforced the roof’s strength.

Roof collapses may happen in vehicles of many different types, which include SUVs, cars, trucks, or buses. SUVs are especially prone to rollover accidents, due in part to the top-heavy design and high center of gravity.

The vast majority of SUV rollovers are single-vehicle accidents where there isn’t any other driver at fault. However, that does not automatically mean that the vehicle’s manufacturer is not responsible for any injury, which is the result of poor roof construction.

Because of the enormous profit margins generated by truck sales, numerous automakers have actively advertised pickups as tough, adaptable, and safe. In actuality, about 220,000 rollover crashes occur in the United States each year as a result of car flaws. Pickup trucks are involved in many of these accidents.

Our rollover accident lawyers are dedicated to bringing irresponsible manufacturers accountable and obtaining just compensation for wounded victims and their families. 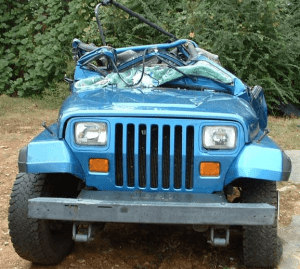 What Are the Most Common Causes of Truck & SUV Roof Collapse Accidents?

On the highways today, Sport Utility Vehicles (SUVs) are some of the most popular automobiles. It seems that virtually every car manufacturer has its versions of this vehicle type and consumers have been more than eager to buy them. According to data from the National Highway Traffic Safety Administration (NHTSA), SUVs roll over close to three times as often as passenger vehicles, and estimates put the number of people that suffer fatalities in roof crush accidents every year at 12,000.

Specific factors have been identified as being contributing factors in SUV-related accidents. The following is a compiled list of the elements that may lead to a roof crush accident. 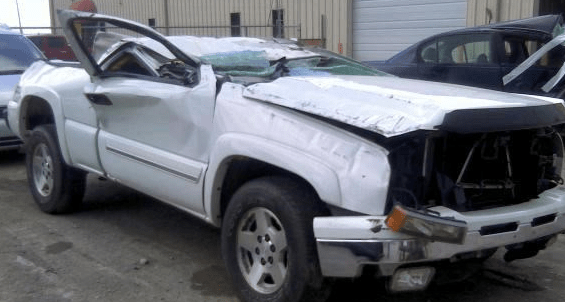 The aspects that may play a role in a caved-in roof accident include the vehicle’s wheels treading on soft soil, driving too close to a guardrail, or a high slope. The weight of a truck and SUV tends to be more top-heavy than a sedan.

When driving a truck or SUV at high speeds on a two-lane highway, a driver may lack time to react and get back in control of the vehicle. It is always advisable to drive with caution if the road’s structure is unpredictable.

Texting, eating, falling asleep behind the wheel, and other types of distraction can cause a motorist to lose attention and control. A vehicle’s center of gravity may be thrown off if it collides with a curb, for example. This has the potential to cause the automobile to flip over.

The maintenance of trucks and SUVs is essential because these vehicles are larger than others on the road. Tires that are low in air supply or deteriorated can put those that drive SUVs and trucks at risk.

A small puncture that goes unnoticed can lead to a tire blowout. Statistics show that more than 78,000 drivers have been in serious accidents caused by tire blowouts.

SUVs can be difficult to handle due to their design. It can be challenging to see behind you and many drivers often underestimate turning. Trucks and SUVs have a higher chance of tipping over if swerved aggressively.

Drivers of larger vehicles are encouraged to never drive beyond the highway speed limit. Studies have shown that more than 40 percent of roof crush accidents are preventable if the SUV’s driver wasn’t speeding.

Rollovers are caused by aggressive driving, which includes unsafe maneuvers such as turning suddenly on corners at high speeds. This type of fast and risky maneuver might cause friction between the tires and the road, leading the car to topple over.

A manufacturer may have made faulty components that resulted in your injuries. Large vehicles, such as pickup trucks and SUVs, can carry more people, but they also have a higher center of gravity, making them more prone to tipping. The poor or insufficient design might lead a vehicle to turn over after a small collision or even during an ordinary drive.

Components like airbags, seat belts, tires, roll bars, and stability controls may fail to protect you from injury in the event of a rollover incident. You may be eligible to bring a product liability claim against the manufacturer if your automobile had defective safety features or faulty components.

If road conditions were a role in your rollover accident, road planners and maintenance personnel might be cited in a lawsuit. A car tipping over during a turn might be caused by a lack of warning lights, potholes, abrupt bends, and uneven roadways. Guardrails that are broken or missing may also play a role in rollover incidents. 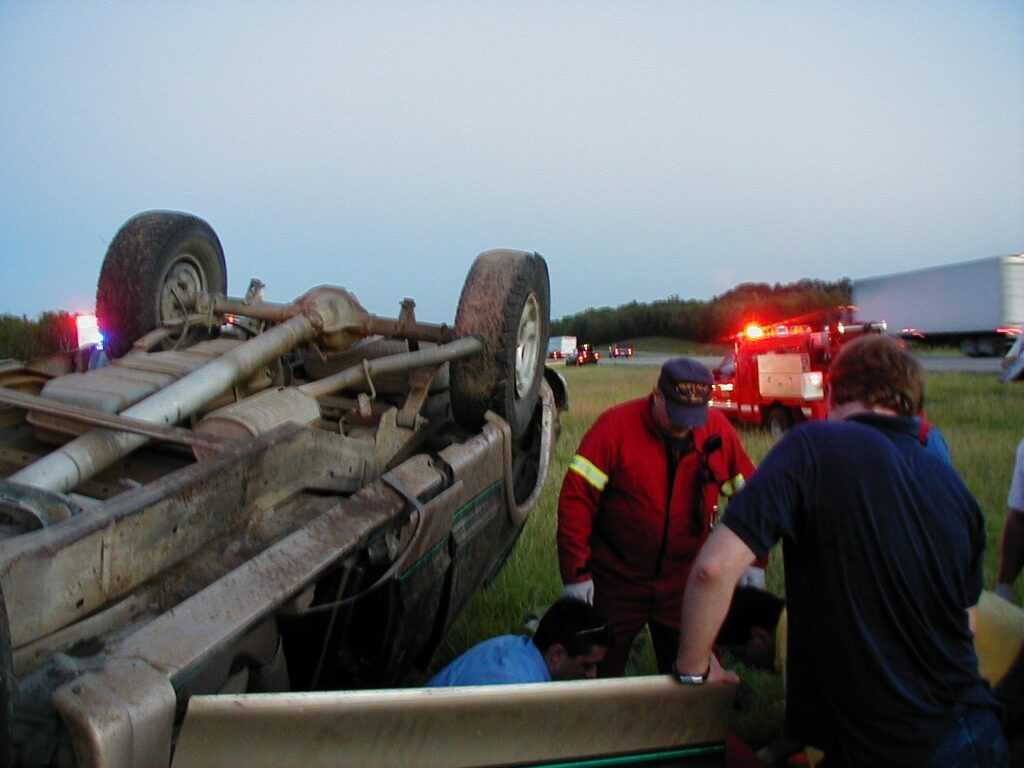 Who Can Be Held Liable in an SUV or Truck Roof Collapse Case?

Defective door locks, or latches that don’t stay locked, airbag deployment failures, post-collision fuel-fed fires, as well as seatbelt buckles that open in case of an accident may all result in catastrophic injuries for passengers and drivers.

The Act was introduced after studies show that close to 94,000 people died in a single year from motor vehicle accidents. While safety standards have been instituted, this has not ensured that drivers never get involved in vehicle accidents.

Besides negligent drivers, vehicle manufacturers can be held liable for roof collapse accidents too. Manufacturers responsible for auto defects fall into two categories in product liability.

If a vehicle part is incorrectly made, chances are that an accident will occur. The parts might not be initially defective but they have been improperly cared for. Lack of care during vehicle transportation may lead to important parts of a vehicle such as the brakes getting damaged.

If a part of the vehicle was correctly manufactured, but the design itself contributed to deaths or injuries, it is still possible to hold the manufacturer accountable. One of the earliest examples of dangerous poor car designs was the failure to implement seat belts in vehicles. Vehicles that have roof collapse issues include popular pickup trucks like: 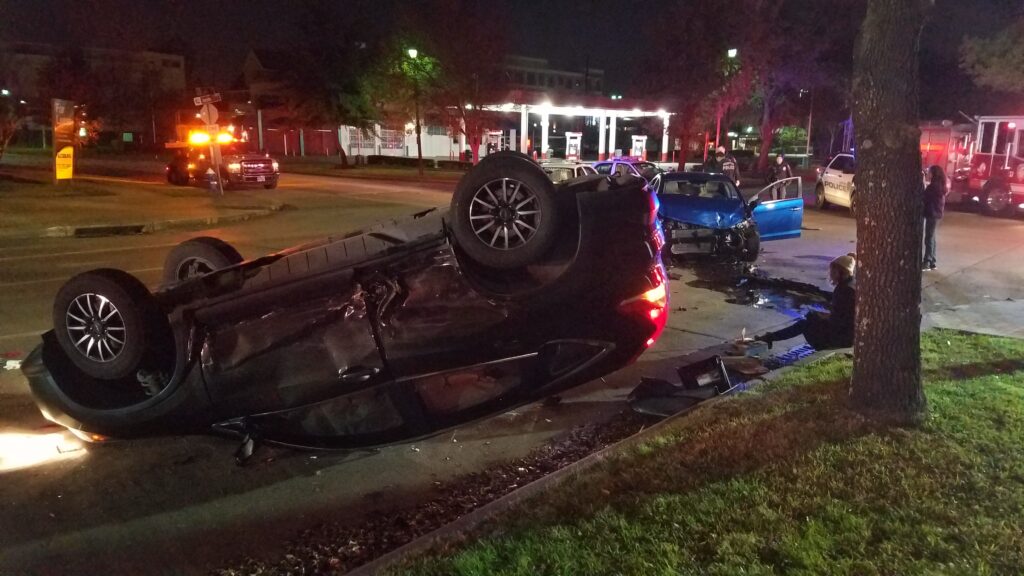 What Type of Injuries Are Commonly Seen in Roof Crush Accidents?

Roof crush injuries that happen when a vehicle gets into an accident, are upside down, and the occupants within are crushed, can be particularly debilitating, catastrophic, severe, or even fatal. Survivors might suffer from fractured bones, paralysis, amputation, or even traumatic brain injury for the remainder of their lives.

Head and brain injuries are particularly common in roof-collapse accidents. Victims usually sustain life-changing injuries, and even if they manage to survive, they might never again work and function as before. It is due to this fact that roof crush injuries are incredibly expensive and make roof crush lawsuits of great importance to both victims and survivors.

Roof Collapse Lawyers Can Get the Compensation You Deserve

In case of a roof collapse rollover accident, occupants of the vehicle may also sustain injuries caused by the weak roof support reinforcements collapsing under the vehicle’s weight. Roofs that collapse may lead to traumatic brain injuries, spinal cord injuries and this may lead to paralysis or even fatalities.

SUVs have taken over the roadways in the United States. They have a higher chance of rolling over, despite being touted as safer, more adaptable, and tougher than ordinary passenger cars. According to statistics, as many as 220,000 SUV rollovers occur in the United States each year.

Hundreds of rollover cases have been successfully prosecuted by our SUV rollover lawyers. Defects in Toyota 4Runners, Ford Explorers, Ford Expeditions, Isuzu Rodeos, and Honda Passport SUVs that cause rollovers, as well as defects that cause or worsen injuries in rollovers, have harmed our clients.

To get damages in a typical personal injury lawsuit, fault must be shown. However, strict responsibility governs liability in a product defect lawsuit, such as one regarding the product liability of a dangerous SUV. Strict liability holds a party liable for damages caused by their acts or products, regardless of any “fault” on their side. In these circumstances, the plaintiff just needs to show that the car was faulty, not that the manufacturer was negligent.

A young married couple was driving down Interstate 35 outside Temple, Texas when the back left tire suddenly detreaded causing the driver to lose control. The SUV rolled on the highway and then onto the shoulder. The wife’s head was crushed when the roof collapsed, killing her. David Willis brought a products liability lawsuit against the SUV and tire maker that later settled for $3,500,000. Expenses $28,269, Attorneys’ Fees $1,400,000, Net to Client $2,071,731

Compensation in a Rollover Lawsuit

The victims of a rollover crash face astronomical damages that are recoverable in a rollover lawsuit. It is one of the reason why you should hire a personal injury lawyer. The compensation can include:

Our rollover attorney has helped many critically wounded clients nationwide recover money for death and catastrophic injuries caused by SUV and truck rollovers. David P. Willis is board certified as a personal injury trial law specialist. We’ve put in a lot of effort to get the best results for our clients, and we’ll do the same for you and your loved ones. Call us at 713-654-4040 or 1-800-883-9858.