Although traffic accident fatalities, in general, are dropping in the United States, the rate of motorcycle accident fatalities is increasing. Even though motorcyclists comprise just 2% of all drivers on our roads, they comprise 13% of America’s traffic accident deaths. In fact, in a given year, around 4,500 motorcyclists are killed in traffic collisions in the U.S., while an additional 82,000 motorcyclists or their passengers are injured, in many cases severely. In Texas, the Texas Department of Public Safety reports that about 500 motorcyclists die in the state each year. That’s around 15% of all Texas traffic deaths. A Houston motorcycle accident lawyer can help an injured victim recover compensation for these damages. if you or a loved one have been hurt in a motorcycle accident contact our Houston injury firm today at (713) 529-9377 to schedule a free consultation.

One reason motorcycles are involved in more fatal accidents is that such collisions frequently involve larger vehicles such as trucks, cars or SUVs. Motorcyclists have little protection other than a helmet and are far more vulnerable to crash injuries.

Another cause of motorcycle fatalities’ rise is the rising number of motorcycle drivers and riders. This is due in part to motorcycles’ better fuel efficiency. In addition, many older Americans have started riding motorcycles for the weekend or recreational driving.

According to Sun Sentinal magazine, 60% of motorcycle crashes are the fault of car drivers. This puts greater pressure on motorcyclists to drive defensively.

And it’s getting worse. Today’s drivers are increasingly prone to distracted driving, as they pay more attention to cell phones and other electronic devices than they do the road around them. That means they’re even more likely not to see a motorcycle — until it’s too late.

Motorcycle accident causes also include poor road conditions and defective equipment. Beyond that, a number of states including Texas have relaxed laws requiring motorcyclists and passengers to wear protective motorcycle helmets. As a result, more people have died and been seriously injured.

Texas repealed its law requiring motorcyclists and their passengers to wear helmets in 1997. Since then, motorcyclists 21 and older who have insurance or have attended a motorcycle safety class have been allowed to ride without a helmet. And since then, motorcycle fatalities in Texas have increased by 25 percent. By contrast, 19 states, as well as the District of Columbia, have universal helmet laws, which hold that anyone riding a motorcycle must wear a safety helmet.

Besides repealing its helmet law, Texas also is considering adding other motorcycle laws to the books. Two bills before the Texas Legislature would allow “lane-splitting” by motorcyclists, which means they could drive between lanes of traffic. That’s currently illegal, but this could change. Both bills would let motorcycles go between two lanes of traffic heading in the same direction, as long as such traffic was moving at 20 miles per hour or slower. 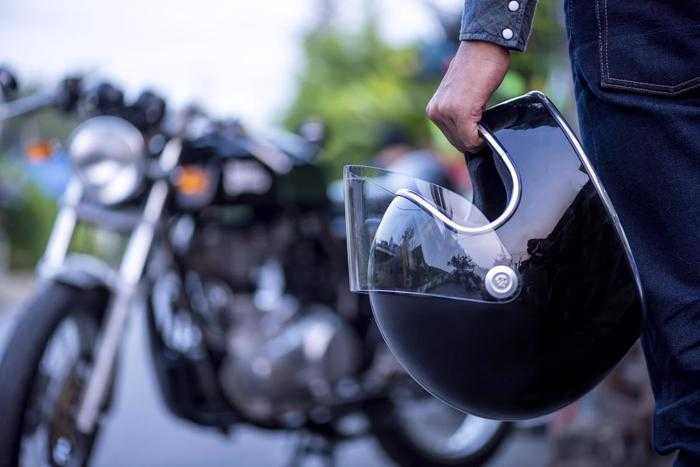 California is the only state In America which now allows legal lane-splitting. In fact, California places no limits on where or when lane-splitting is done or the speed at which traffic is proceeding. Even so, California law officers recommend that motorcyclists not ride between two lanes when traffic is going over 30 miles per hour.

In Texas, motorcyclists are allowed to ride two abreast in the same lane. That form of riding isn’t addressed by a state law in Texas.

According to the National Highway Traffic Safety Administration (NHTSA), helmets saved the lives of nearly 1,500 motorcyclists in the year 2009, when helmets were 37 per cent effective in preventing motorcycle fatalities. Yet even when motorcyclists survive, a head injury can occur and be debilitating, perhaps causing paralysis or another life-changing injury, such as amputation of an arm or leg. . The NHTSA also says motorcyclists have 35 times more likelihood of dying in a traffic accident or collision than do those in passenger vehicles.

Many motorcycle accidents result in fractured bones and other severe injuries. A broken arm, leg, back or neck might not kill a motorcyclist, but these are still severe, serious injuries leading to high medical expenses and often preventing a victim from working, which is an expense in itself.

Not all motorcycles are equally dangerous. Depending on the environment and road conditions, some are safer than others.

So-called “trail” bikes for riding on dirt roads or uneven surfaces are more likely to crash on highways than motorcycles which are meant for highway use. The latter have more powerful braking systems, as well as tires that are better able to grip the pavement. As for other dangerous kinds of motorcycles, these can include garage-built racers and high-speed street bikes. Motorcycle Accident Lawsuits

If a member of your family was injured or killed in a motorcycle accident which wasn’t his or her fault, your family has a legal right to seek fair and fitting financial compensation for your many losses, including medical costs, pain, suffering, lost present and future wages and in some cases funeral costs.

For this kind of legal help, you’ve come to the right place. The Willis Law Firm is ready to assist you with your motorcycle accident claim, starting with a free legal review of your case after you contact us — and at no obligation.

Contact our Houston car accident lawyers, and let’s get started sizing up your prospects for a successful lawsuit.