If you or a loved one has suffered a personal injury due to fire, it can be a good idea to hire a Houston burn injury lawyer at the Willis Law Firm. Estimates by the American Burn Association put the number of those injured in burn accidents in 2016 at about 486,000. Of this number, about 40,000 people were hospitalized while a further 3,275 died as a result of their injuries.

You can’t let the negligence of another party to cause you injury without seeking the kind of legal assistance guaranteed to get you the compensation you are entitled to.

Industrial accidents are a fairly regular occurrence in Texas, which is why you should know about the different types of burns that you could be exposed to as well as a Houston, TX injury attorney that you will require to ensure that your rights are protected.

You and your family could be exposed to different types of fires, which include more than just flames coming from a burning building. The 4 main types of fire are:

Thermal fires include flame, contact, scalds, and flash fires. It is the type of fire that most people know about and it is the type that most commonly affects people throughout the country.

A flash fire may occur if a fire is contained in an area before being released suddenly, such as a fire behind a door in a burning building. Scalds happen if a hot liquid of any types makes contact with skin. Contact fire injuries are burns you get if you touch a hot pan on a stove of after leaning up against a pipe that you didn’t know was hot. The most common types of fire are flame fires and may occur under any circumstances.

Chemical fires typically occur in research or industrial settings. In some instances, chemical burns are highly destructive due to their reactions to the elements present in human skin.

Radiological fires usually occur in industrial and research settings. However, they may also occur in medical facilities that have malfunctioning equipment. Radiological burns usually require treatment over long periods of time before being considered safe.

Electrical burns occur if a person is caught in a running current or grabs onto 2 wires thus completing the circuit. Electrical burns often do much more than causing external and internal damage, which is why they are so challenging to treat. 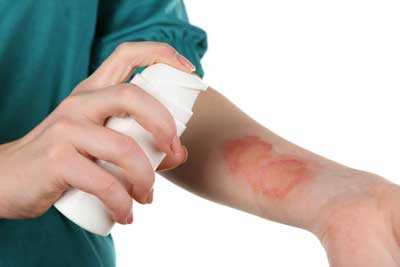 What Are the Different Types of Burn Injuries?

What Are The Commonest Causes of Burn Injuries?

The American Burn Association has provided the following statistics:

What Type of Treatment is Required for Burn Injuries?

The victim of a burn requires medical care immediately after it occurs. Using ice or water for cooling can help reduce the pain and depth of the burn but over-cooling may lead to hypothermia. Pain-relief medication and bandages are enough for minor burns.

For more extensive burns, however, further treatment will be needed. It may include the following:

Modern advancements in the field of medicine have increased the chances of surviving burn injuries and have increased the effectiveness of treatment. Skin graft and flap procedures can be used for repairing most burn scars for improving victims’ quality of life. Burn victims might live longer but their quality of life will significantly diminish as they suffer lifelong pain and permanent disfigurement.

A skin graft is one of the most popular treatment options for severe burn injuries. It is a surgical procedure that involves taking skin from a healthy donor spot on the victim and subsequently transplanted onto the damaged areas. Skin grafts are of several different types, which include:

If the graft “survives” the first 72 hours after the initial implantation surgery, it will be accepted by the body. If the infection is kept away and a steady supply of blood provided, it should take about 6 months for the graft to fully heal.

What is a First-Degree Burn?

Keep in mind that using ice isn’t advisable. Instead, use cooler water over the area to provide some relief. You should also ensure that you protect the wound by using a bandage to cover it. Use a bandage without adhesive so as not to get the sticky stuff inside the wound.

You might experience some pain and inflammation, which is why you might have to take some over-the-counter medication if necessary. First-degree burns are generally easily treatable at home and usually heal in due time.

What is a Second-Degree Burn?

A second-degree burn is the next one up the severity ladder. The size of the burn determines whether the burn can be treated at home or you should seek emergency care. It is usually not larger than 3 inches in diameter as a second-degree burn. You should realize that it isn’t just a surface-level skin injury but rather can affect the skin’s next layer too.

Try not to use ice when attempting to treat a burn, and if blisters form, never try to pop them open to release the fluid. Finally, you might be tempted to use butter or ointments to relieve some of the pain, but you shouldn’t since that can further infect or irritate the area. So, always try avoiding topical treatments unless you have a doctor’s authorization.

What is a Third and Fourth Degree Burn?

Third and fourth-degree burns are some of the most severe types of burns. The burns not only affect the different skin layers, but the intensity of a burn can extend as far as the bones, the surrounding muscles, as well as fat.

A burn like this can even damage the nerves, which would explain if you experience tingling or numbness in the burn area. The burns are usually the result of prolonged time in the flames as opposed to a quick encounter with a candle, etc.

The severity of third and fourth-degree burns can be experienced if there’s a fire in a building, and if that’s the case, it is also quite possible to inhale too much smoke, thus poisoning the lungs with carbon monoxide.

The first thing you need to do when dealing with such burns is contacting the emergency services. The burns require medical care. Don’t attempt anything that can cause further injury to yourself. If you were wearing clothes that have been burned to the skin, don’t even attempt to remove them. Instead, wait for the professionals to do that.

Don’t use cold water to treat your wounds. The pain will be severe, but cold water can irritate the area further, If possible, you should try to elevate the areas of the body that received the burns to lower the blood pressure close to the wounds.

The symptoms of third and fourth burn include the following:

Only compensatory damages are usually sought in most personal injury cases in Texas. Compensatory damages include both economic damages such as medical expenses and lost wages along with non-economic damages such as emotional pain and suffering. You can seek punitive damages, but only if the plaintiff is able to prove gross negligence or emotional pain on the part of the defendant.

In Texas, children, spouses, and parents are allowed to file wrongful death lawsuits whose primary aim is seeking compensation for a loved one’s loss. Survival actions may also be implemented for compensating a family member’s estate for the suffering and expenses before death.

Is It Possible to Get a Settlement for a Burn Injury Case?

Burns have been associated with severe punishment and trauma. The jury verdict research shows just how serious burn injury cases usually are.

Due to the trauma associated with burns, the burn injury cases usually have a considerably higher verdict potential with juries. According to recent studies, burn cases involving extensive third-degree burns are likely to bring multiples above the economic damages that you won’t find in other case types.

Burns that are relatively minor such as a first-degree aren’t as valued as more severe burns. One study revealed that first-degree burn cases usually bring in less than expected while the second and third-degree burns bring considerably more.

Willis Law has handled many serious burn injury cases, some of them involving wrongful death and the vast majority involve disfigurement, as well as other substantial human damages. We have successfully navigated cases, which include fuel-fed gas fires, apartment fires, as well as scalding burns and explosions. Damages generally vary from one case to the next and factors like the extent of the burns always come into consideration.

If you have been in an accident that led to you suffering serious burns, you need to work with a burn lawyer you can trust. Willis Law Firm strives to help you recover the compensation required for your medical treatment, mental anguish, pain and suffering, lost wages, etc. We are the team of burn injury attorneys you need on your side whether you have suffered a burn after being injured or in a vehicle accident or on the job. Contact us now to find out how we can help.