Vehicle fires happen when a car’s gas tank or fuel-delivery system explodes into flames. Vehicle fires happen in about 2.4 percent of all fatal crashes. The NHTSA estimates around 310 deaths per year are caused by a post-collision vehicle fire. The largest cause of these vehicle fire fatality accidents is rear-ended collisions. These rear-end accidents account for approximately 143 of these fatalities (46%). Many more fire deaths & fire injuries may be partly attributed to vehicle fires. The National Accident Sampling System (NASS) estimates that 670 burn injuries occur each year.

David Willis has the experience in litigating vehicle fire cases. He obtained the result of a $3 million settlement for the vehicle fire shown below in which two people died. 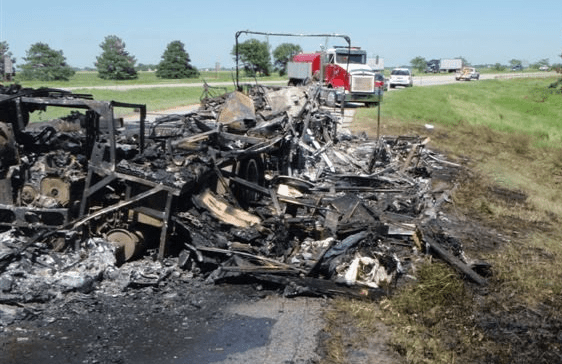 Car fires can be attributed to defects in a vehicle’s gas tank or fuel-delivery system — defects that allow ruptures, spilling their contents. Gasoline then can ignite by a single spark after a collision, leading to a car fire which can be even more damaging if not catastrophic than the collision itself.

Defective gas tanks often cause vehicle fires. Sometimes this happens because the so-called “filler neck” funnel on the gas tank comes loose in a collision, spilling the tank’s gasoline contents, which then can ignite explosively with one spark.

Indeed, fuel tank leaks are the most common cause of car fires, followed by electrical system failures, according to the website HowStuffWorks.
An impact also can cause a vehicle fire by igniting the flammable substances which routinely circulate throughout an engine, those being gas or gasoline, engine oil, power steering fluid, engine coolant, and brake fluid. If the engine’s lines or hoses funneling such substances through the engine brake, the contents can spill, causing a fire.

Leaky hoses, inadequate fuel line materials, faulty wiring, fuel lines lacking proper safety valves, and defective airbag detonators also can cause car fires. In addition, overheated catalytic converters in the exhaust system can cause a car fire, as well as engine overheating, when heated oil and other fluids spill onto the engine and perhaps ignite.

Even the design of a vehicle can lead to a car fire. As in the notorious Ford Pinto in the 1970s and more recently the Jeep made by Chrysler, some fuel tanks are placed in a vulnerable position, exposing occupants to explosions and vehicle fires if they are struck from behind in a crash. A bitter irony of such car fire accidents is that, without the car fire, an occupant of the vehicle might survive a crash without injury. But a car fire that erupts suddenly after a crash can seriously injure or even kill occupants of a vehicle, making the post-crash fire even worse than the collision itself.

According to the Texas Department of Insurance, a state agency, nearly 12,000 vehicle fires happened in Texas in 2013, leading to 60 injuries and 48 fatalities. The National Fire Protection Association says that, in the same year, the United States had 164,000 vehicle fires, causing 925 injuries and 300 fatalities. Motor vehicle fires in all police-reported traffic crashes are relatively rare, occurring at the rate of approximately 3 fires for every 1,000 vehicles involved in crashes. For all vehicles involved in fatal crashes, fires are considerably more frequent, with about 26 fires per 1,000 vehicles In crashes nearly 9 times the rate for all crashes. For each of the 3 classes of vehicles of primary interest in this study – passenger cars, light trucks, and school buses, the fire rate and estimated number of fire crash annually are:

The Severity Of Vehicle Fires 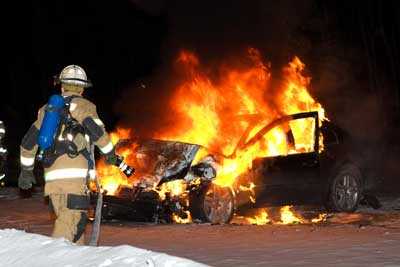 Vehicle Fires By Direction Of Impact

Impacts to the front of the vehicle account for 60 to 70 percent Of the crash fires, for both passenger cars and light trucks. This applies to fatal, as well as non-fatal crashes. Rear impacts are over-represented (3 times as likely) in fatal vehicle fire crashes involving passenger cars, but not for light trucks. This may be a reflection of the more vulnerable location of fuel tanks in cars than in light trucks. For less severe, non-fatal collisions, this over-representation of fire in rear impacts does not appear.

The average American auto, SUV, or car has a capacity of between 12 and 20 gallons in its fuel tank. Now consider this: A single gallon of gasoline has explosive power equal to six sticks of dynamite. That means a full 20-gallon tank has the explosive power of 120 sticks of dynamite.
Such car fire accidents shouldn’t happen. After all, if passengers can survive in a collision unscathed, then the vehicle’s fuel lines and gas tank also should stay in one piece. But due to design defects and manufacturing defects, the gas tank or fuel lines can rupture and cause a devastating car fire.

Burns from a car fire is among the most devastating injuries a person can endure after a car crash. Burns can be first degree, second degree, third degree, or fourth degree, depending on their severity, with fourth-degree being the worst.
A third-degree burn, also known as a full-thickness burn, can extend through the skin and lead to scarring and perhaps the need for amputation. A fourth-degree burn can lead to amputation and also death.
Burn injuries from a car fire or other fire can be lifelong and debilitating. They can make it difficult or impossible for a person to work or lead a normal life. They can involve a lifetime of treatments and costly health care bills, as well as causing loss of income when the victim is unable to work as they had been able to do previously.

Many recalls have been made for vehicle fire dangers, including Chrysler recalling about 470,000 cars and SUVs from model years 2011-2014 due to a fire hazard posed by a failing alternator.

Ford recalled the Ford Pinto models in the 1970s because their gas tanks could explode in a rear-end collision. Ford also recalled nearly 15 million vehicles globally between 1996 and 2010 due to a cruise control mechanism that could start a fire. For decades the major manufacturers have known and ignored the problems of vehicle fires. This intentional conduct of not correcting the vehicle fire problem and not recalling these dangerous fire-prone vehicles has led to many huge jury verdicts and awards to punish these corporate giants. In a vehicle fire lawsuit case known as Grimshaw v. Ford Motor Company (1981) involving a 1972 Ford Pinto that caught fire in a rear-end collision, the jury rendered a huge punitive damage award against Ford. On appeal, Ford Motor argued that the evidence was insufficient to support a punitive damage award. In an appellate court decision on this now-famous Ford Pinto Fire Lawsuit the court wrote:

“Through the results of the crash tests, Ford knew that the Pinto’s fuel tank and rear structure would expose consumers to serious injury or death in a 20 to 30 mile per hour collision. There was evidence that Ford could have corrected the hazardous design defects at minimal cost but decided to defer correction of the shortcomings by engaging in a cost-benefit analysis balancing human lives and limbs against corporate profits. Ford’s institutional mentality was shown to be one of callous indifference to public safety. There was substantial evidence that Ford’s conduct constituted ‘conscious disregard’ of the probability of injury to members of the consuming public.” (119 Cal. App. 3d at 813)

Nissan issued a recall in 2015 for more than 550,000 Rogue SUVs worldwide because snow or water entering the vehicle via drivers’ shoes could seep through the floor, then produce an electrical short that could cause a fire.
Chrysler recalled more than 1.5 million Jeep Cherokee and Jeep Liberty SUVs in 2013 because their rear gas tanks were vulnerable and could puncture and catch on fire in a rear-end wreck, much like the Ford Pinto. At least 70 fatalities have been attributed to Jeep gas tank fires. 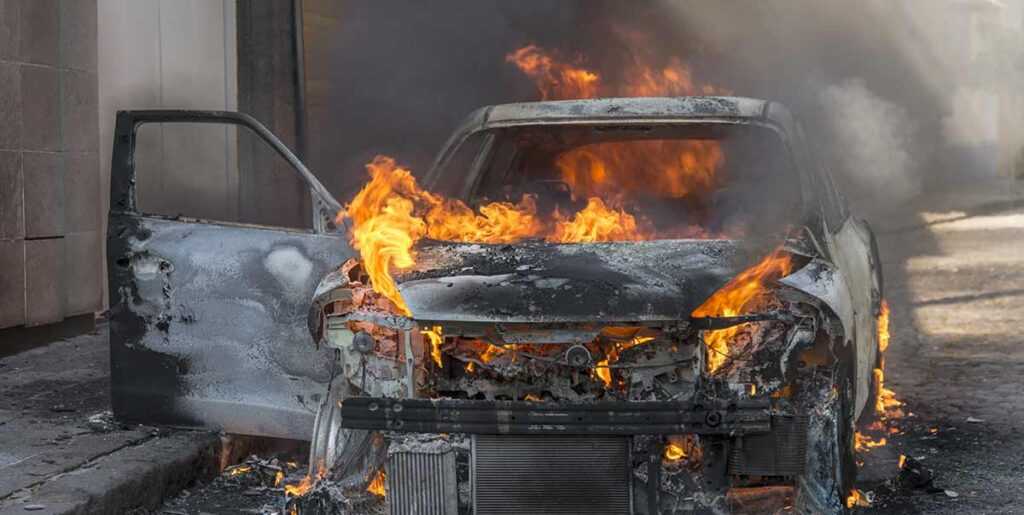 Lawsuit for a Vehicle Fire

If a car fire burn injury was caused by a defective design in an SUV, car or automobile, then victims have a legal right to claim financial recovery from the manufacturer of such vehicles.

Many automakers strive very hard to ensure their gas tanks and fuel-delivery systems stay intact in an accident or collision. But some fail to do so.

One car fire lawsuit was successful against the creators of a Chevy Malibu model with a faulty fuel system. Another came due to an Isuzu vehicle whose gas tank was improperly positioned. Other car manufacturers also have been negligent in cases of car fires.

Any vehicle whose defects cause a car fire leading to injury or death to the driver or occupants of the vehicle is responsible for such horrific accidents. That means any car manufacturer which causes such a car fire accident due to its own negligence is liable in a car fire accident lawsuit.

If someone in your family suffered injury or death in a car fire accident, notify the Willis Law Firm today concerning your case. We can provide you with a vehicle fire accident lawyer to press for economic compensation for your family’s injury losses, including such costs as medical bills, funeral expenses, lost present and future salary, pain, and suffering.

Our injury law office has helped many critically wounded clients nationwide recover money for vehicle fires. David P. Willis is board certified as a personal injury trial law specialist. We’ve put in a lot of effort to get the best results for our clients, and we’ll do the same for you and your loved ones. Call us at 713-654-4040 or 1-800-883-9858.