Need a Houston Bus Accident Lawyer? “Leave the driving to us” was the longtime refrain of a famed passenger bus commercial. But consider this: When you leave the driving to a commercial bus driver, you also leave your safety in the hands of that driver and the bus line charged with training the driver and providing a safe vehicle.

Many Americans who have relied on bus lines, vehicles and drivers to be safe have instead been subjected to horrible injuries and even death in bus accidents — which, for many reasons, are among the most devastating road accidents in America. That’s why you may need help from our dedicated injury lawyers in Houston if someone in your family was injured or killed while riding on a bus.

Why are buses dangerous? Consider that most buses don’t have any seatbelts for safety. Even worse, on crowded passenger buses, some persons must stand while they ride.

Also, buses tend to be circled by many glass windows, and these can shatter in a crash, injuring passengers.

Buses also are large in interior volume, which can be filled with objects. This means there’s much room for passengers to be hurled about the vehicle and slam into objects or other passengers.

Long buses also are more likely to roll over in a crash, which could lead to a roof-crush injury if the bus comes to rest upside down, or on its roof. Then, passengers inside could be crushed by the bus as its roof gives way.

The Federal Motor Carrier Safety Administration (FMCSA) defines a bus as a motor vehicle which can carry over 10 persons, without including the driver. Such buses are a common form of transportation for millions of Americans.

These Americans range from children who make school buses the biggest form of mass transit in the country to commuters taking buses to work, groups taking a chartered bus to an event or guests riding a casino tour bus to their gambling destination.

Is bus riding a gamble for all these Americans? It can be, which is why the Willis Law Firm stands ready to assist persons injured in bus accidents by providing an injury claim or lawsuit. 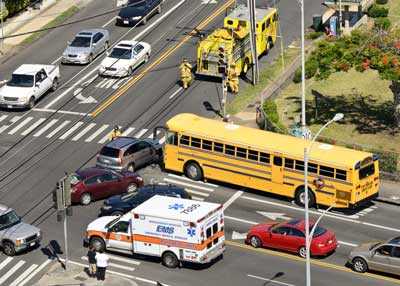 Among many bus accident statistics is the fact that school bus accidents kill as many as 11 children annually and injure another 12,000.

Also, the FMCSA says bus accident deaths during a recent 10-year period averaged 335 deaths each year. Beyond that were thousands more bus accident injuries at that time.

Among the causes of bus accidents can be fatigued, poorly trained, inattentive or ineffective drivers — drivers who may fall asleep at the wheel, over-react and swerve off the road or drive under the influence of alcohol or other drugs.

For example, in July of 2015, after a church bus crashed near Indianapolis, Indiana, killing 12 persons, it was found that the driver had been using cocaine prior to the crash. Charles Goodman, 54, was charged with causing death while driving under the influence of a controlled substance.

When heading from Gary, near Chicago, to a religious gathering in Ohio, the 15-passenger bus went out of control and rolled over on I-70.

In other cases, the bus line owner or operator may be negligent in terms of failing to maintain its vehicles’ safety. Maybe the bus has overly worn tires that blow out at high speeds and cause a rollover or other accident. Or a bus may have faulty brakes or defective warning lights.

Some disreputable bus lines knowingly fail to comply with legal safety standards as a cost-cutting measure. Then, if their bus crashes and the line is shut down by authorities, they may resume operating just by using a different name.

Victims of a bus accident can have various types of injuries, including whiplash, fractured bones, slipped disks, torn tendons, torn ligaments, severe lacerations, severe bruises, spinal cord injuries or facial injuries. They can suffer burns, paralysis or even amputation due to a bus crash.

Fractured or broken bones can be frequent in bus crashes since most buses fail to provide seatbelts to passengers, who can be tossed around the bus’s large interior. Lacerations or cuts also often occur since buses are encircled with so many glass windows — windows that can shatter into tiny shards in a crash. Victims of a bus crash can be subjected to scarring or permanent disfigurement due to fractures, lacerations, burns and other types of injuries.

If someone in your family was injured or killed by a negligent bus driver, operator or owner, notify the Willis Law Firm today. We will quickly offer you a free legal review of your case, with no obligation involved. Then you can decide if you want to engage a car accident lawyer with our firm for help with your bus injury case.

Bus lines such as Greyhound, BoltBus, Megabus or Trailways may have many skilled drivers and well-running vehicles which uphold safety standards. But when a bus line operates an unsafe vehicle and passengers are injured or killed due to the bus line’s or bus driver’s negligence, Americans have a legal right to claim financial compensation.

Such claims are likely to be resisted by a bus line or its insurance company. This makes it even more important that victims secure the services of an experienced bus accident lawyer for their case.

The Willis Law Firm can provide such a lawyer for you. So contact us today, and let’s get started exploring your prospects for a successful bus accident lawsuit.