Power morcellators, a piece of surgical equipment used in laparoscopic hysterectomies, have been linked to the spread of uterine cancer, according to the FDA. Ethicon (Johnson & Johnson) and other morcellator manufacturers have already been sued by victims.

Powerful Morcellators Have the Potential to Spread Cancer Cells

Surgical equipment with lengthy, tube-shaped blades is known as power morcellators. Uterine fibroids are cut into little bits using these blades so they may be removed through the patient’s stomach. This surgery was popular among women since it was less intrusive and did not leave a standard surgical scar.

The issue is that doctors are unable to determine whether uterine fibroids contain malignant cells. If a fibroid contains cancer cells, cutting the uterus with a morcellator will disperse cancer cells throughout a woman’s belly and pelvic region, posing a major health risk.

But that recall was too late for countless women in America who already have suffered severe injuries from the defective medical device. 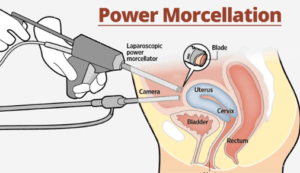 It’s common for women to have fibroids, which are usually benign muscle growths in the uterus. Morcellators can remove non-cancerous uterine fibroids, also known as leiomyomas, from the uterus’ muscular tissue during minimally invasive laparoscopic surgery known as a myomectomy. Another option is to remove the uterus in its entirety, which is known as a hysterectomy.

Fibroid dangers can arise when fibroids develop cancerous cells — and power morcellators can make them worse when they’re used to remove what are believed to be benign uterine fibroids. A power morcellator is essentially a tube-shaped spinning blade that’s applied during fibroid removal surgeries and for laparoscopic or robotic hysterectomies. The aim is for the morcellator to shred fibroids.

This occurs when the morcellator’s tiny, rotating blades break down tissue into minute fragments which are intended to be extracted via a small, minimally invasive incision. But during this process, many cells may be dispersed in the abdominal area, and when those cells are cancerous, extreme harm can be inflicted on innocent women.

As a result, a victim of a defective power morcellator can have substantially less chance of surviving cancer, especially if she’s had a history of uterine cancer, such as uterine leiomyosarcoma.

These women have a legal right to financial compensation using a morcellator lawyer. Such a lawsuit can claim payments for losses including medical costs, which can be extremely high when even more surgeries are required due to the morcellator’s failures.

For example, other surgeries may be needed to remove the fibroid and uterine tissue causing bowel infections or obstructions.

After uterine fibroid surgery with a defective power morcellator, victims also may require additional surgery or surgeries to extract uterine or fibroid tissue from the liver, intestines, or other organs. Victims also may be diagnosed with uterine sarcoma, which can be deadly.

Power morcellator studies have shown that women having uterine surgery using a power morcellator had nine times more likelihood of getting the aggressive, deadly cancer known as leiomyosarcoma.

Even the FBI, or Federal Bureau of Investigation, is investigating morcellator devices. The FBI found that one out of every 350 women subjected to a morcellator procedure has had unanticipated cancer and that malignancy was worsened by the morcellator grinding up the cancerous tissue and dispersing it in the body. The FBI probe is designed to learn what Johnson & Johnson knew about the dangers of the devices.

The U.S. Food and Drug Administration — which began approving morcellators in 1991 — now advises against using laparoscopic power morcellation for hysterectomies when uterine fibroids are involved.

Morcellator brands include several from Johnson & Johnson, one of which is known as the Diva, from its Ethicon division. In fact, up to three-fourths of all morcellators come from this source. Other brands are the Gynecare X-Tract, Gynecare Morcellex, and Morcellex Sigma. In addition, other manufacturers have sold power morcellators. These include Karl Storz GmbH, Olympus Corp., and Richard Wolf GmbH.

If a member of your family has suffered an injury when subjected to a power morcellator during surgery, please contact a personal injury attorney. Our injury law firm represents clients in power morcellator litigation. We are now taking new claims in all 50 states and are managing individual lawsuits nationally. David Willis is a personal injury trial law specialist. We routinely help people across the nation who have been hurt by defective medical devices like power morcellators. And we achieve remarkable results. Call us at 713-654-4040 or toll-free at 1-800-883-9858 to tell us your story.