If the airbags didn’t work in an accident, it’s important to evaluate whether defective airbags are to blame for your injuries. Airbags that malfunction usually either deploy at the wrong time or don’t deploy when they should.

Many car manufacturers were forced to recall their airbags. Faulty airbags contribute to many different types of injuries, including the neck, spine, head, brain, face, and eyes. If an airbag accidentally deploys at the wrong time, the person driving may have difficulty keeping control of the vehicle.

Typically, airbags are mounted inside of the dashboard or in the steering wheel. A special sensor signals the deployment of the airbag when a collision occurs. Airbags are designed to provide additional protection for passengers in the vehicle. When they malfunction, however, they can cause serious injuries, some of which can be life-threatening. When airbags deploy, they release a tremendous amount of force. Estimates show that they move at more than 100 miles per hour.

Injuries can easily occur anytime that much force is involved. This is particularly true when airbags malfunction. Problems with airbags are usually caused by a faulty crash sensor. In most cases, the sensor either doesn’t signal the airbag to deploy when it should or it causes the airbag to deploy when a collision has not occurred. In some cases, it also may fail to deploy all of the airbags in the vehicle.

An airbag defect might be anything that causes the airbag to fail to meet the car industry’s approved safety requirements. Strict government safety rules govern how manufacturers must design, produce, and install automobile airbags. Specific safety testing standards are included in these regulations to assure crashworthiness. If a supplier fails to achieve these criteria, the airbag may be faulty and pose an unreasonable risk to customers. The following are some examples of harmful airbag flaws that have caused people to be harmed in the past: 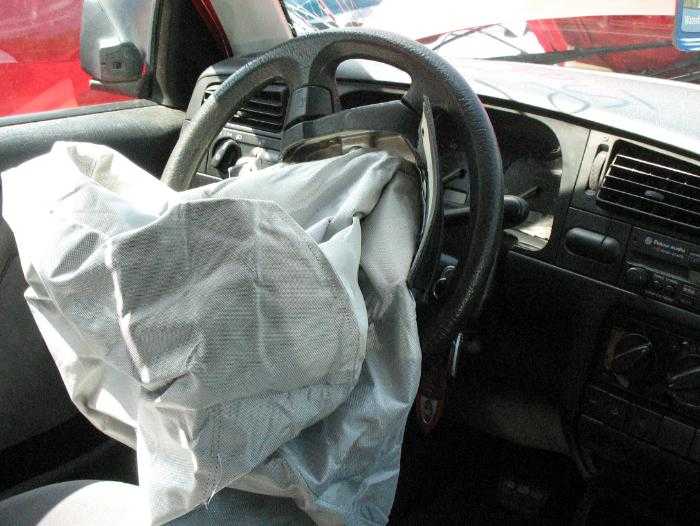 Injuries resulting from defective airbags have included broken necks, injuries to the spine, head, and brain, facial injuries, and injuries to the eyes. Drivers may not be able to control their vehicle if an airbag deploys at the wrong time when they are driving down the road.

What Should I Do If I Suspect That My Airbags Are Faulty?

If a defective airbag causes injuries, the company that manufactured it may be liable because of the strict liability doctrine. If you suspect that the airbags in your car are faulty, you should contact an auto defect attorney at the Willis Law Firm right away. We can take a closer look at your case to determine whether or not you have a valid claim. If we agree to take your case, we will help you seek as much money as possible to cover the cost of your injuries and any other damages you sustained.

What Steps Should I Take If I Was Injured By A Defective Airbag?

If you want to get as much compensation as possible for your injuries, you should take the following steps after an accident:

1. Make Sure Any Evidence Is Preserved

Don’t take your car in for repairs until a lawyer has a chance to look at the airbag. Otherwise, evidence that could help you in your case may be destroyed. After the crash, determine where your car is. Talk to the mechanic to have them wait to make any repairs until the car has been inspected by a car accident lawyer.

2. Write Down Notes About The Accident

When an accident occurs, snap as many photos or videos of the scene as you can, paying particular attention to the airbag. Save these files and make sure they are easy to access. At the Willis Law Firm, we have a skilled survey team that is specially trained to determine exactly how an accident occurred. Using their knowledge, they can reconstruct the accident to figure out what took place, both inside the vehicle and outside of your car. The details that we gather are an important part of building a strong case.

3. Keep A Record Of Any Injuries

4. Understand How Long You Have To File A Lawsuit

When an accident occurs, you need to act relatively quickly if you plan on filing a lawsuit against the manufacturer of your car, the maker of the airbag, or any other company that may be liable for your injuries. Depending on where you live, the statute of limitations on cases like these is sometimes as little as a year.

5. Talk To A Knowledgeable Lawyer

When injuries involving a faulty airbag occur, they can leave you reeling. Working with an experienced lawyer who has dealt with cases involving defective airbags in the past is the best way to simplify the process. Our experts will not only file a claim on your behalf but we will also handle any negotiations. If your case winds up going to court, we will even represent you in the courtroom.

Injuries resulting from defective airbags are often quite severe. In some cases, victims may even die. Some types of injuries that commonly occur include the following:

Can Manufacturers Be Held Liable?

Manufacturers often are driven by greed, making decisions based on how they will affect their bottom line rather than on safety. Honda is a great example. Beginning in 2004, they received numerous complaints about faulty airbags in their vehicles. Many of these claims were settled financially before the company got around to issuing a recall for the vehicles. According to the New York Times, the recall wasn’t issued until the end of 2008. Companies are often hesitant to act, even when their products pose a danger to consumers. Additional oversight is needed to prevent issues like these from occurring in the future.

Vehicles With The Greatest Risk Of Defective Airbags

According to the National Highway Traffic Safety Administration (NHTSA), some Honda and Acura vehicles that were produced between 2001 and 2003 have defective airbag inflators, which pose a serious risk to consumers. They advise consumers not to drive the vehicles listed below without first replacing the airbags:

As of today, there are an estimated 50 million defective Takata airbags. That number is expected to climb as high as 70 million by the end of 2019. Takata, one of the primary suppliers of safety systems for vehicles, made faulty airbags that could explode when they are triggered during an accident. People riding in vehicles with these airbags are at an increased risk of suffering major injuries or being killed as a result. A recall for these airbags was issued nationwide in 2014 by the NHTSA. Takata has been sued numerous times since then for manufacturing defective airbags and for putting off issuing the recall. Below are some of the claims included in these lawsuits:

Faulty airbags created by Takata may have resulted in many injuries, ranging from bruises, burns, and lacerations to puncture wounds. Flying shrapnel caused by exploding airbags could also have resulted in more serious injuries. As of right now, Takata’s defective airbags are responsible for killing 15 people and injuring over 100 more. Many of these injuries have been life-changing, with victims sustaining severe injuries to their faces and necks as a result of metal shards flying through the air.

Many car manufacturers including Nissan, Chrysler, Mazda, Honda, Ford, Toyota, BMW, Mitsubishi, Subaru, Mercedes-Benz, and Volkswagen have increased their vehicle recalls. Some of the vehicles that are included in the recall as a result of defective Takata airbags are listed below. This list is constantly growing, more than doubling in size in the recent past.

If you or any of your family members sustained injuries as a result of a defective airbag, contact the Willis Law Firm today. We represent families across the United States in lawsuits against negligent manufacturers. David P. Willis is board certified as a personal injury trial law specialist. We’ve put in a lot of effort to get the best results for our clients, and we’ll do the same for you and your loved ones. Call us at 713-654-4040 or 1-800-883-9858.